A 29 year-old man was admitted to Sekota hospital on Febuary 2, 2014 after suffering a serious injury. The man was stabbed during a violent fight and was left in a state of shock (BP 80/40mmhg and PR 126 bpm). After abdominal examination, it was concluded that he had a 2 cm by 2 cm deep wound on the subumbilical area. There was eviscerated bowel and the area was soiled with fecal content. Fortunately, it was viable (not ischemic).

After the diagnosis of the penetrating abdominal trauma, the area 2 degrees to the stab injury was eviscerated. Meanwhile resuscitation and the baseline investigation were sent to the labotatory. The patient was taken to OR and a laparotomy was conducted. The intraoperative finding was a 1 cm by 1cm two site bowel perforation at its mesentdric border. The site of perforations was repaired using two layers and cleaning the peritonium. Haematocrit was 18% so one unit of blood intraoperatively and one unit post operatively was given. IV antibiotic was started after 7 days. The patient finally reached a stable condition and was discharged from hospital. 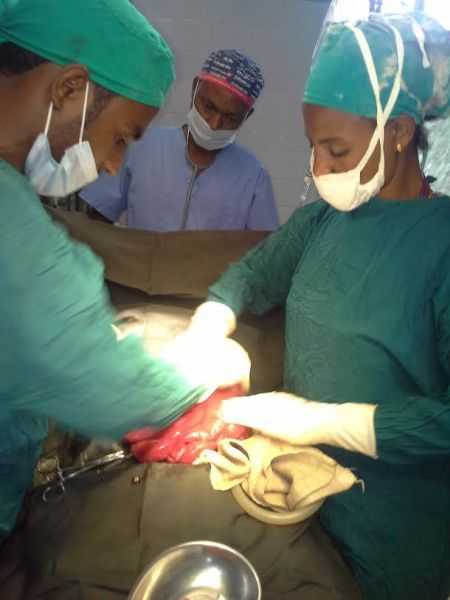 A 34 year-old woman, gravida 5 para 4, was admitted to the hospital after complaining of a pushing down sesnsation. She suffered these sensations for a duration of 2 days. [and passage of liquor 1 day duration] She has no history of an ANC follow up. After examination of the patient it was concluded that the BP was unrecordable, the pulse rate was weak and feeble, she had dry lips and buccal mucosa and a pale conjuctiva. After abdominal examination it was concluded that she had grossly distended abdomen and a severe tenderness. There was an easly palpable fetal part, however obstetric ultrasound results showed that a FHB was not present.

After diagnosis of the uterine rupture 2 degrees to the obstructed labour, a two line IV was secured and fluid resuscitation continued. Then a catheter was inserted and two units of cross matched blood were prepared. Afterwards, the patient was taken to OR and a laparotomy was conducted. After the sugery a gross hemoperitonium and dead fetus floating in the peritonium were found. The uterus was ruptured at its lower segment extending to the left lateral. After the removal of the dead fetus and hemoperitonium, a total abdominal hysterectomy was executed. After the operation, the patient was totaly transfused 3 units of blood and was covered by IV antibiotics. The patient’s condition became progressive and she was discharged after 7 days in the hospital. 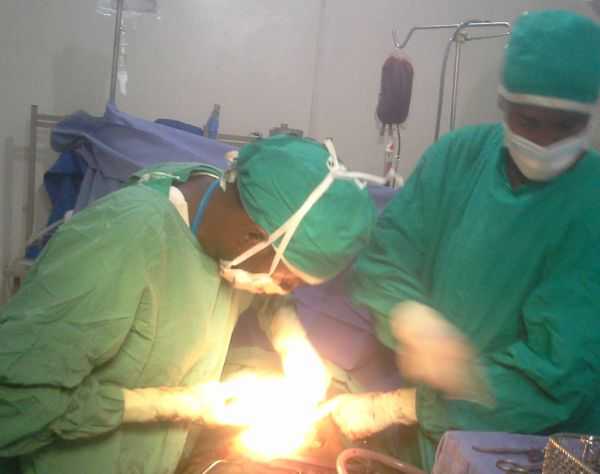 Get in touch with your own experience as an IESO and we will publish it here.